Form 3-card sets of the same rank (lined up vertically) to score 300 points or more.

Cards in the 6 x 4 grid cannot be moved directly. However, they are manipulated when a card is place on any of the eight special Arrows.

Cards placed onto an Arrow will "Slide" in the direction that the arrow points. When a card slides, it pushes other cards in that row. The sliding stops when cards are pushed into an empty space, or pushed off the other end of the row.

Cards from the Stock can be moved directly to an Empty Space. When this is done, no sliding occurs.

The first set of three cards removed score 1 times the rank value of the cards. For example, if a set of three 9's are removed, 9 points are scored.

The second set of three cards score 2 times the rank value. So if the 2nd set removed are 4's then 2 X 4, or 8 points are added.

To achieve higher scores, it is important to remove sets of lower ranked cards first since each set removed increases the multiplier. For example, Kings removed first only score 13 points. When Kings are removed as the 13th set, they score 13 x 13 or 169 points!

Aces are the best choice to remove first, however, don't waste too much effort on them if other lower ranked sets can be made easier at first. In the screenshot below, 5's are easier to get than Aces, so go for the 5's first since they are still a fairly low rank.

Pay close attention to cards that are pushed off the end of a row. Try to recycle as many cards as possible since this will give you many more opportunities to make sets. For example, in the screenshot below, you can place the Ace of Hearts to the left of the 5 of Hearts. That play will push the 5 of Spades off the right side of the row. Since there are two or more 5's in the row, the 5 of Spades gets recycled to the bottom of the Stock.

Try to get a matched set as early as possible in the game. Having empty spaces available offers more options. For example, in this screenshot, a set of 5's can be matched on the very first play by placing the Ace of Hearts on the arrow in the upper right (to the right of the King of Spades.) This play also places two Aces fairly close together. Unfortunately, this play will cause the 9 of Clubs to be lost since there is not another 9 in that row. That is probably an acceptable compromise.

Since matched sets only require three cards, there is a fourth card of each rank that is expendable. After a set of three cards are made, use the fourth card of the same rank to your advantage by placing them along the outer edges so that when they are pushed off, it does not matter. Also, pay attention early in the game so that you only dispose of one of each rank so that you leave three cards of that rank still in play so they can be matched up. 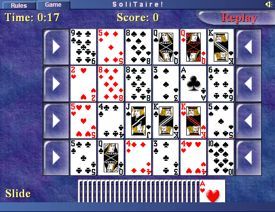 Slide is an original solitaire game designed by Warren Schwader in 1988. It very well could be the most strategic solitaire game of all time. Whether that is true or not, Slide is definitely unique!