Remove all cards from the layout by pairing up "near-ranked" cards that are also adjacent to each other in the layout.

Cards may be moved onto nearby cards if their rank is one higher or lower. Aces and Kings are consecutive ranks and may be played on each other.

A nearby card is defined as any card that is one space away from another card horizontally or vertically, but not diagonally. In the layout shown above, there are many plays that can be made such as

After two cards are combined, a space will be left behind. Spaces can be filled according to the following rules: 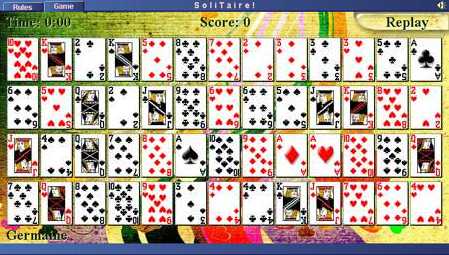 Starting with the layout above, the 6 of Hearts is moved onto the 7 of Diamonds. This creates an empty space in the center of row 2 that must be filled before any more cards can be combined.

The next diagram shows that that 10 of Spades was moved up to fill the empty space. But that move left another space behind, so the 4 of Diamonds was also moved up.

But there is still an empty space that needs to be filled.

The next diagram shows that the 3 of Spades was moved to the right, and all cards to the left of the 3 of Spades followed it. Notice that the 8 of Spades is now next to the 7 of Spades in the 3rd row. So that play could be made next if that is what you wanted to do. That is how cards are moved around the layout in order to open up other plays.

Notice that the space that the 7 of Clubs was in (on the bottom row,) has now been removed from play.

The following diagram demonstrates that there is an empty space at the end of one of the rows (row 3.) This space does not need to be filled before another play is made because the space is on the end of a row.

You could move the 5 of Hearts or the J of Hearts into that space next, or you could choose to not do that and make your next play instead - such as moving the Jack of Hearts to the Queen above it, or any other play. The next diagram shows a typical layout that could arise at the end of the game. The Q of Clubs and 6 of Clubs on the top row are isolated from the rest of the cards and are going to cause problems in this scenario.

When few cards remain, pay attention to what ranks have duplicate ranks and what ranks are missing. In this layout, there are duplicate Jacks, sixes, and sevens. Your next play should probably include one of those cards.

If there was a rank missing, pay attention to the next ranks in the sequence so that you don't isolate a rank, thus making it impossible to win. Similarly, try not to create a missing rank any sooner than is necessary. For example, moving the 4 of Clubs onto the 3 of Diamonds would eliminate the last remaining 3 a little too soon. Germaine solitaire was based on rules from the book "The Complete Book of Solitaire" by Pierre Crepeau. It was named after his grandmother, who created the game.