Remove all cards from the layout by pairing up "near-ranked" cards that are also adjacent to each other in the layout.

Cards may be moved onto nearby cards if their rank is one higher or lower. Aces and Kings are consecutive ranks and may be played on each other.

A nearby card is defined as any card that is one space away from another card horizontally or vertically, but not diagonally. In the layout shown below, there are many plays that can be made such as 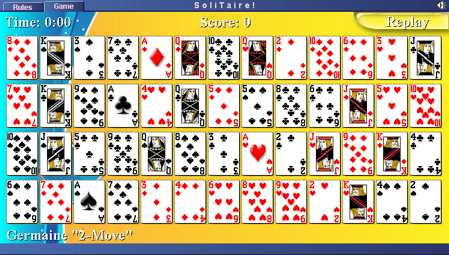 Starting with the layout above, the 2 of Clubs is moved onto the A of Hearts. This creates an empty space in the center of row 3.

In the above diagram, the four queens are far away from either the Jacks or Kings. Therefore, the J of Hearts is moved left a space using one of the two moves allowed after two cards are combined.

The second move slides the 9 of diamonds to the left in order to bring it closer to the 8 of Clubs in the row above it.

These moves leave the board as in the following diagram.

Now that two card movements have been made, it is time to combine two other cards. In our effort to bring a Jack closer to one of the Queens, the 2 of Clubs is moved onto the 3 of Clubs.

Then the two card movements are the J of Hearts and 9 of Diamonds are moved left again. as shown in the following diagram.

Notice in the above diagram that there are now two open spaces. As each two cards are combined, another empty space is created.

In the final diagram below, we complete our short term goal of placing a Jack next to a Queen by moving the 8 of Clubs onto the 9 of Diamonds below it, then sliding the 5 of Spades right, and the Q of Hearts down.