Remove all cards from the layout by matching pairs of cards next to each other.

Pairs of cards of the same rank are removed from the layout when they are nearby to each other. To remove the pair, drag one of the cards on top of the other.

A nearby card is defined as any card that is one space away from another card horizontally or vertically, but not diagonally. In the layout shown above, there are many plays that can be made such as

After two cards are paired and removed, two spaces will be left behind. Spaces can be filled according to the following rules: 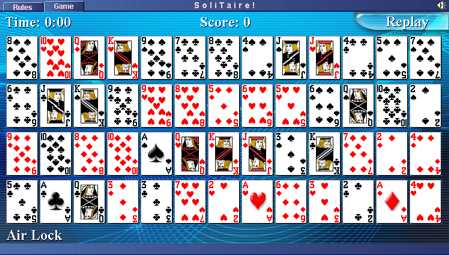 Starting with the layout above, the 9 of Clubs and 9 of Hearts are paired and removed. (To remove the pair, drag one of the nines on top of the other.) This creates two empty spaces in the center of row 2 that must be filled before any more cards can be paired.

The next diagram shows that that K of Hearts was moved down to be close to the K of Spades.

Then, the 9 of Spades on the top row is moved left one space, and thus all other cards following the 9 of Spades are also moved left. This move has the benefit of lining up the 8 of Clubs and 8 of Hearts in rows 1 and 2.

However, there is still an empty space to the right of the K of Hearts that needs to be filled, before we can remove another pair.

The 8 of Hearts could be moved left causing the 2 of Spades to line up with the 2 of Diamonds (after all cards on that row are slid left.) This is the move that was made in the next diagram.

The following diagram demonstrates that there is an empty space at the end of one of the rows (row 2) as a result of removing the 2 of Spades and 2 of Diamonds.

This space (to the right of the 10 of Clubs) does not need to be filled before another pair is matched because the space is on the end of a row. However, the empty space below (between the 7 and 4 of Diamonds) MUST still be filled because it is a space in the center of a horizontal row.

Each pair of cards removed score 2 points. When all cards are removed, a bonus is added that is equal to the rank values of the last 8 pairs matched.