Remove all cards from the layout by matching pairs of cards totalling 13.

Cards available for pairing are completely uncovered cards in the Pyramid or Reserve piles.

Kings total 13 on their own and so are automatically removed from the game.

Cards that are paired up are removed from play.

There are 3 Reserves beneath the Pyramid each holding 1 card. When a card is removed from a Reserve, the Reserve is opened up so as to accept any other single card from the Pyramid. In this, the Reserve piles act similarly to Free Cell.

In the example layout below you can pair up the 4 and 9, OR you could utilize the empty Reserve pile by placing the 7 of Hearts in it. That would then create more possible plays such as the 7-6, J-2, or the 9-4. 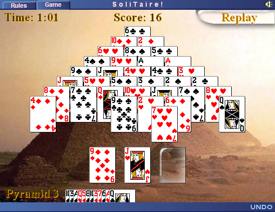 Often, it is better to use a card from the Reserves rather than using a Pyramid card. For example, in the layout above, it may be more strategic to match the 4 with the 9 in the Reserve pile rather than the 9 from the layout.

With careful play, we believe most shuffles are winnable.

Pyramid 3 is a Solitaire Network original created by Warren Schwader in 2007.