Using one deck, cards are automatically dealt one at a time to the single Discard Pile.

Move the card next to the Stock to one of the 10 "Pin" spaces. Each pin may hold only one card.

To place a card on a Pin, the rank of the card must be equal to or higher than all cards on lower numbered pins. See the screenshot above for the Pin numbers.

When it is impossible to place a card because it doesn't follow the rules set out above, you must place the card in the Ball 1 or Ball 2 Columns. You are allowed to place up to 3 cards in each Ball. (Cards are always placed into Ball 1 before Ball 2.)

When there is an Open frame (no Spare or Strike) then the total pins knocked down for both balls are scored.

Since a Strike and Spare cannot be scored until more balls have been thrown, the latest Frame will not show an accumulated score until more balls are thrown. In the 10th frame, you may have to bowl extra frames in order to satisfy the scoring requirements for Strikes and Spares.

Since no Strike or Spare was thrown in the 3rd frame, it can be scored right away. 8 points are added to the previous total for a new total score of 53 in the 3rd frame.

There is a Spare in the 10th Frame. Since Spares cannot be scored until one more ball is thrown, one extra ball must be thrown in order to arrive at a score for the 10th Frame.

In the example below, a 2 must be played. To follow the rules, it must be placed before the 4 onto either Pin 1 or 2. 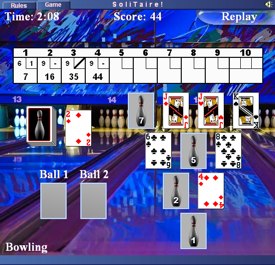 Another solitaire game called "Bowling" was created by Sid Sackson in the 1970's. It is a completely different game using rules that are not at all similar to Bowling solitaire on Solitaire Network. The wikipedia page and other references on the internet do a poor job of differentiating these two very different solitaire games. The only things they have in common is that both games are solitaire games and both are bowling themed.